For their prior gathering, the VALOR fellows found themselves in Richmond while the General Assembly was in session.  Oft described as sharing many traits with sausage making, the legislative process was in full swing and on display for the fellows to enjoy.

But, the legislative process is only half of the story. (OK…yes, you’re right…  One third)  What happens after the GA has done their job and gone home after passing a few hundred new bills into law?  Who implements all of the exciting shiny new laws and fleshes out the minutia that the overarching law does not address?  Obviously, the answer is the Executive Branch:  the Governor, working through the various Secretariats headed by his appointees, is charged with taking raw sausage and creating the flavorful and aesthetically pleasing meal that the Legislature intended.  (Probably enough trying to work “sausage” into this post…)

It was the Executive Branch that occupied the fellow’s time on the final day of the Richmond seminar, and it was an honor to meet with several of its members.  Secretary of Agriculture and Forestry Todd Haymore and Deputy Secretary Travis Hill spoke of some of the successes achieved by the Department and some of the initiatives put in place to see that success story of agriculture continues on beyond their tenure. 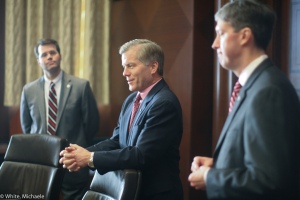 Finally, it was our great privilege to be able to meet with the Governor of the Commonwealth of Virginia, Bob McDonnell.   While not “raised on a farm” in the sense that springs to mind when someone utters that phrase, you would be hard pressed not to think so given the emphasis his administration has placed on agriculture and its impact on the State and local economies.  And agriculture’s prominence in the administration has been purposeful and deliberate, not something that happened by default or by accident.

All of those we met with had varying degrees of familiarity with farming and agriculture during their formative and early professional years.  And yet, all arrived at the conclusion, independently, that agriculture and forestry are a big deal in Virginia.  I think that one of our charges as members of the VALOR program is to see to it that there is an understanding of the role that agriculture and forestry play in Virginia and its impact on the economy of the Commonwealth, in the members of the next administration, and the one after that, and the one after that, and on into the future.

Many thanks to all of those who took the time to visit with the VALOR group during the busy legislative season.  The topics raised and questions answered were quite valuable and appreciated.

View all posts by beancrusher