In preparation for our second session with VALOR Class IV, there were lots of questions I hoped to get answered, as well as questions I had myself. Headed to ‘crop country’  I was excited to see what I could bring back to my own farm in regards to varieties, equipment, markets and other valuable ‘think it over this winter’ information.

This session was held in the southeastern part of the state and over on the Eastern Shore, a far piece from home in the western part…its warmer, flatter and “bigger”. Bigger as in farmers have more of their land in one spot vs. scattered around – or have a mountain in between! Travel in itself can be a hurdle in my own operation, getting supplies to and from town as well as produce to and from a market. In the ‘East’, it didn’t seem as difficult, and a 30-minute commute covered a lot more territory, making lots of chores easier, cost efficient and FAST!

Upon arrival to our first hotel, we met with Dell Cotton of the VA Peanut Growers Association. He gave us an ‘intro to the peanut industry’ talk and some VA Peanut goodies. Southampton County, VA grows 40% of the states crop. It is one of only eight counties in the state capable of growing the crop, due to weather, climate and soil structure. The first commercial peanut crop was harvested in Sussex VA in 1842. The rest of the “Peanut Belt” travels south and west, all the way to New Mexico. Dell talked about how the peanut industry is very concerned with peanut allergies and food research, therefore peanut growers (who are farmers that also grow cotton, soybeans, wheat and corn – no VA farmer JUST grows peanuts) send 1% to the National Peanut Board who then conduct research on the peanut allergy and other issues.

After our lesson inside, we traveled to Birdsong Peanuts, were given a peanut history presentation and toured the shelling plant. Peanuts are delivered by truck, dumped from the trailers into silos and augured up into the top of the plant where they are shelled, sorted, rocks and debris are removed and then bagged and put on cold storage until picked up by a buyer – like Planters or Mars for trail mix and candy bars and Peanut M&M’s!

Our evening was then spent at the hotel with VALOR graduate Dana Fisher of Virginia Farm Bureau; his session helped us review and work on understanding our Strengths Test we took prior to the trip. From the test, we were given five themes, from four different categories; my themes were Harmony, Analytical, Individualization, Belief and Input. I’ll take it. These strengths can also change over time as fellow classmates stated their test results this time varied from what they may have had entering college.

We then had a Q&A with Dana as to what we should look for and do as VALOR fellows. His advice was:

We were then hosted by a local Ag teacher Ronald Daughtrey, his wife and FFA Chapter and given a presentation on how cotton farming got started in Virginia. We were all given a cotton bowl and told to pick out the seed (ginning) with our hands. We would see tomorrow how this is done mechanically at Commonwealth Gin. I could listen to more stories told by Mr. Daughtrey anytime!

Our 2nd day during Session II started with a tour of the Smithfield Processing Plant. I was very excited about this tour. The sheer size of this operation, from pig producers to making smoke-flavored bacon bits, was intense and eye opening. Inside this plant, every person on the floor had a specific job and ONLY one job! An employee may only open a box, place a pork chop, or slice a certain muscle, and then the next person does another slice, another placement or another layer of boxing material. The efficiency of the entire process was mind-blowing – only 3% of the hog was not used (-almost- everything but the squeak, as Smithfield proudly displayed in their information center). After seeing that process and driving a short distance to their Innovation Center, where all the “magic” happens, we were then introduced to the marketing side of Smithfield’s products. From how many company names they label under to the various products they offer as well as where the product goes is another enormously efficient, streamlined process. To learn that the Smithfield plant wasn’t even the BIGGEST one was another moment of ‘good grief’ for me (that plant employs more people than what LIVE in my home county!)

Our next stop was Commonwealth Gin; we learned what happens to cotton after arriving from the farmers’ field. I was again impressed by the massive ‘cotton bales’ sitting in the yard (pretty in pink; the color choice was a question I didn’t get to ask), awaiting their turn through the gin. And I should be impressed as the three-in-one machine just recently built to create those bales cost approximately $750,000! Four bales equaled the standard module that was made by the current harvesting equipment, but the efficiency of this new baler meant less loss and weather damage of the crop and similar handling ease in the yard and around the gin.

Our evening was then spent with the sweetest family and one of my most enjoyable parts of this session. We were hosted by Paul and Pam Rogers, Farmer of the Year and row crop farmer… and owner of a pretty BIG machine! Growing up with -antique- John Deere tractors, its never in my blood to pass up a ride on a green machine. When we arrived, it was raining so we didn’t get to see Mr. Rogers harvest the crop he had planned for us but still allowed those that wanted a ride in his GPS-guided tractor to hop in and take it down the road, well sort of… The cab looked like a fighter pilot cockpit! Computer screens, buttons, levers – it was awesome! (I’d seen these features before, at farm shows, but this was a field-ready harvesting machine with all the bells and whistles.) With the click of a finger on the touchscreen and a few adjustments with a foot pedal and steering wheel, the tractor took off! Here I was sitting in a six-figure farming power house, and it was driving ME down the road! Once we hit the turnaround, we had to disengage the autonomous system. As Mr. Rogers walked me through the turnaround, he stated “this isn’t your first time is it, you need a job Monday?!” – to which I grinned and hit the throttle.

i couldn’t turn this thing around in our biggest field at home! 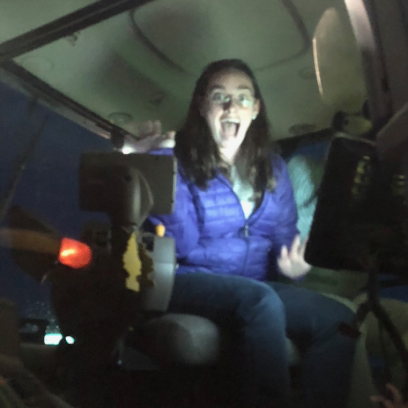 not a bit excited…not a bit…

After our test drives and another delicious home cooked meal, Mr. Rogers was asked about his farm and what the future held for his family and farming situation. His grandson and wife were in the hunting camp where we were eating dinner and I looked for their expressions while he mentioned them as he talked. He stated his grandson loved riding in the tractor with him or his own father and Mr. Rogers did hope his grandson had an interest in the farm for the future.

I found that while on this trip, there isn’t enough time or always a good surface to stop and write, so I started to doodle instead, and I can’t draw. During Mr. Rogers closing comments, my journal looked a bit like this: 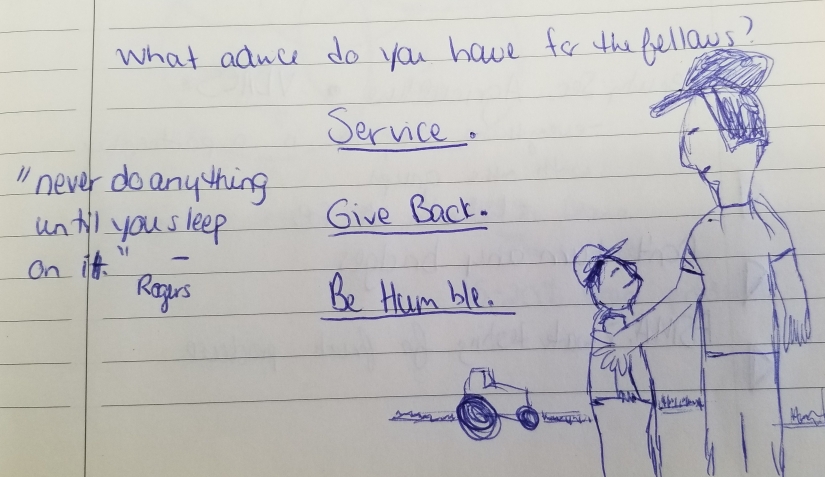 I won’t make a living with my doodles but I sure will remember this trip.

I could go on about the final two days of our trip, which took us to the Port of Virginia, vegetable farms across the Bay on the Eastern Shore and Chincoteague Island (and a huge potato\crop farm, which I was also floored by), but I hope you get the jist of what I got out of this session. Things are a LOT bigger in the operations we visited than what I’m used to. My 25-acre problems are no where near the same as these folks – for many reasons. The enormity of these operations is nothing I can even think about managing at this point in my life. Even though the size comparisons are nothing like what I’m used to, bigger isn’t always better. I couldn’t turn that tractor around in any of my fields if it were hooked up to any sort of implement. I don’t have enough flat ground to grow 50 acres of ANYTHING, in one place or field. But, what I CAN do is run cattle on our mountain ground, plant vegetables in the flat parts, grow turkeys in between and our old Ford TW feeds, plants and plows just fine. Its not about big, or new, for most folks, its what’s going to be the most efficient for the task at hand. Autonomous tractors on large, flat farms lead to efficiency in planting, spraying and harvesting. Large peanut shelling companies can sort and sell peanuts to different consumers as to their most desirable markets. Large pork processors can get so diverse with their varied products and be so efficient in their processing program that less than a tenth of the animal is wasted and almost all possible products from that animal make it to a market.

If bigger gets the job done better, then bigger IS better. AG is Awesome and I can’t wait until Session 3!

Farmer's Wife, mother of boys, 4-H Extension Agent and Co Owner of Church Hill Produce. Kari Sponaugle is the 4-H Youth Development Agent and Unit Coordinator in Highland and Bath Counties in western Virginia. Kari holds a Bachelor of Science degree in Agribusiness from Ferrum College and a Master of Science degree in Agricultural Leadership & Community Education from Virginia Tech. Kari and husband Michael are co-owners of Church Hill Produce, in Highland County. Since 2011, they've grown commercial fresh produce, pick your own strawberries and freezer beef. The farm completed Harmonized-GAP certification in 2018, opening markets to grocery chains like Food Lion, Martin’s, Giant and Harris Teeter. The Sponaugles live on the family farm in which includes a 200 cow-calf operation and raises turkeys for Virginia Poultry Growers Cooperative. Kari and Michael have two sons, Jasper and Clu. View all posts by SponaugleKB