Experience – it is what shapes a man (or woman for the “inclusive” editors out there).  Everyone is shaped by this little thing we call life.  My life’s journey has been up and down, some good times and some times that just plain sucked.  I wouldn’t trade them for anything, though.  It’s who I am.  I’ve been blessed to travel, taking every opportunity along the way to experience life and culture around the world.  I like to take time when I am traveling to make some notes along the way – to tell the story.  It’s my trip, so I get to write it like I want.  Well, here in Vietnam, it’s obvious that WHO writes the story influences how YOU perceive the story.

In Saigon, Vietnam there is the War Remnants museum.  It’s a somber journey through a conflict that continues to have lasting effects.  Just look around at the lives changed in our country.  Then take the opportunity to reflect on the lives changed in Vietnam.  Walk through the jungle here, and you will find a crater hole left from a bomb dropped from a B-52.  Then take a look at the death and destruction on both sides of the conflict – sad.  It can best be summed up in the words of my great-uncle “Booty”, a man that served 4 years in the Pacific during WWII, when he says simply “War is HELL.”

In the War Remnants Museum, it is easy to take notice of symblism, key words, and punctuation that influence how you perceive the picture.  For instance, the North Vietcong Army (VC) is referred to as the “liberation” forces.  Never thought of it that way – American history books never said we were an “occupying force.”  The government of South Vietnam – “puppet government.”  Troops that fought for the South Vietnamese Army – “puppet troops.”  Lot’s of references to “America’s Aggression,” the number of bombs, guns, troops, tanks, bullets, etc. They even do a pretty str0ng job using words of American soldiers and politicians to tell the story.  It’s a little different than the version we often hear in our text books.

Probably the best use of symbolism was posting the opening of OUR most treasured document as a country – The Declaration of Independence.  You know that little thing about life, liberty, and pursuit of happiness.  Something about respecting sovereignty of another nation.  They pretty much tell the story like we tell our story for the fight for independence.  Just like we celebrate the 4th of July, they are telling it the same way.  Now keep in mind, this government doesn’t respect much of those values themselves, but they got to write the story – it’s theirs, remember?

Now this is where it starts to really work on me.  I love my country.  I love FREEDOM more.  My values are shaped by my experiences, and a little reading along the way.  One of those readings just happens to be St. Thomas Aquinas,  Summa Theologica, the basis for Just War Theory.  Just war theory gives us the sound moral basis for war.  It’s pretty evident from the pictures I have seen in this museum, on tv today, stories by any veteran that war is not some glorified Hollywood movie.  It simply is HELL.  How else can you describe killing humans in mass?  What happens when you kill someone?  You are denying them their FREEDOM to LIVE.

Now I am not saying all war is unjust, it is not.  Unfortuantly, humans are universally corruptable, in every society and culture.  We have mountains of history books of evil, corrupted leaders for evidence.  What I am saying is that war should be a LAST resort; not the first.  It sickens me to hear people today speak so cavalier of war, and involvement in conflict around the world.  You will never drop enough bombs, or kill enough people to make everyone happy.  The only way that happens is there is only one person left, and I’d venture to bet that person would be unhappy, too, having no one with whom to share the world.

Corruption is where my aversion to big, powerful government sprouts.  Oppressed people around the world typically have one thing in common; a large government in charge.  A government with power is inherently going to have corruption.  Why?  Well government is ran by people, and people are corruptable.  It’s as sure as the day is long.   It’s these corruptable power influences that lead men to do horrible things in pursuit of more power and money.  These conquest typically are carried on the backs of the working class, who do not have access to the powerful – the pawns.

Now the end result of our “conflict” in Vietnam was a typical peace accord signed in France.  Securing the right of the Socialist Republic of Vietnam to write the history books, and tell the story.  It ended hostile relations between the U.S. and Vietnam, and for the most part relations are “normal” today – whatever “normal” is.  The people here love us, and to be honest look to us for help now in dealing with the Chinese intrusion into their sovereignty.

What is not so obvious result of war are the often unseen and silent victims of war.  We all know there were ottrocities; we may even know someone who suffers from PTSD, some physical impairment, or even those who did not return.  Most of the victims you may be thinking about are were directly or indirectly involved in the conflict during the time it actually happened.  Well what if I told you there were victims of this conflict generations removed?   I’m sure you’ve heard the term Agent Orange.  A toxic chemical used indiscriminately during the war that has had lasting effects four generations removed from the war.  Stay tuned to my follow-up this post where I will address the most disturbing part of our visit to the War Remnants Musuem.  Visions I can not unsee; overwhelming me to tears of pity, disgust, and saddness. 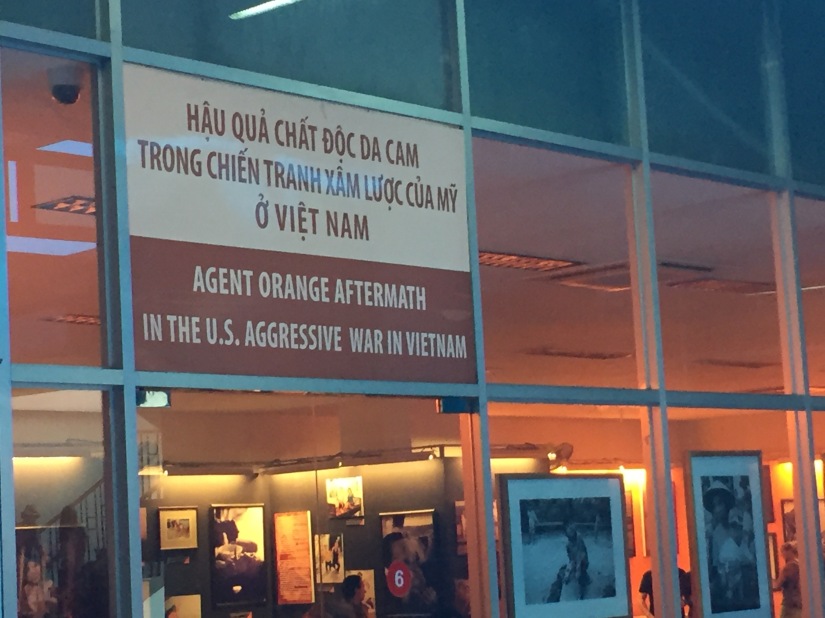 View all posts by Joe Wilkerson