During the ninth seminar of VALOR Class IV in Central VA, we fellows enjoyed a stop at Bright Farms in Elkwood, VA. General Manager Nate Gurevitz gave us a tour of the 150,000 sq. ft. facility and showed us the hydroponic growing process for the greens they grow, from start to finish.

First, seeds, trays and medium are prepared in the seeding area where a vaccum-roller system lays seeds perfectly in a shallow ‘row’ on a Styrofoam tray, filled with soil medium. After seeds are placed, they run under a ‘spritzer’ to moisten the soil. The entire tray-seed-water process is automated, with the help of one worker to open soil bags and feed trays between sections of the machine. After watering, trays enter a high tech germination room for three days where air circulation, temperature and moisture are closely monitored by computer.  After seeds sprout, they are transferred to another germination area for a day and then transferred to the ‘beds’. The growing area is a large open greenhouse (2 acres under roof) with hydroponic pools, approximately 18 inches tall (cinder block and plastic liner construction). Each pond or pool is complete with aeration and fertilization systems for an ideal hydroponic growing environment. This time of year, growth is supported with artificial light and heat since daylight hours are shorter and less intense than in the summer. Each day a new section of germinated trays are added to the growing space and slowly float from one end of the greenhouse to the other. As you walk the length of the greenhouse, you can tell almost exactly where plants change in age. But just in case you can’t, there are flag markers for days of the week for record keeping. A plant’s time spent on the pond ranges from 14 to 19 days, depending on plant variety and desired size/maturity. 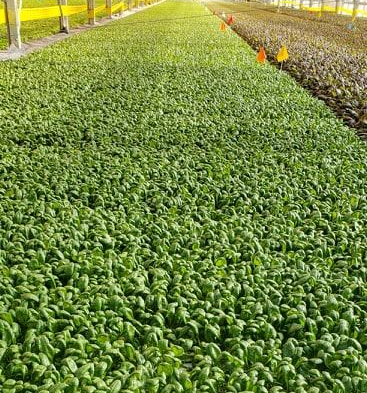 Yellow sticky tape is visible between growing areas, catching predators. Buckets of ‘beneficials’ are also located in the greenhouse that release beneficial insects into the grow space to help control pests. This is a no-spray facility.

At the harvest end of the greenhouse, a conveyor takes the trays to a machine that ‘chops’ the leaves from the tray. Leaves are then placed in a chiller. After chilling, leaves are processed and packaged according to the mix ‘recipe’ and buyer specifications. The timeline from harvest to store is less than 24 hours. After harvest, trays are washed, sanitized and put back in rotation and can have a life span of six months before needing replaced. According to Bright Farm’s website, they harvest over a million pounds of produce each year. 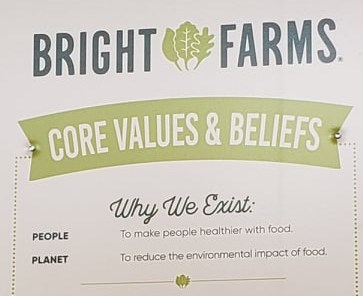 I enjoyed this sign in the greenhouse. Bright Farms is doing its part, as stated in its virtual video tour, they are “more than locally grown, we’re grown for locals”. 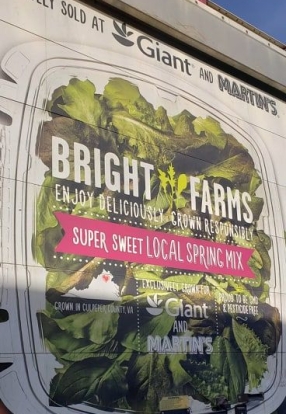 Farmer's Wife, mother of boys, 4-H Extension Agent and Co Owner of Church Hill Produce. Kari Sponaugle is the 4-H Youth Development Agent and Unit Coordinator in Highland and Bath Counties in western Virginia. Kari holds a Bachelor of Science degree in Agribusiness from Ferrum College and a Master of Science degree in Agricultural Leadership & Community Education from Virginia Tech. Kari and husband Michael are co-owners of Church Hill Produce, in Highland County. Since 2011, they've grown commercial fresh produce, pick your own strawberries and freezer beef. The farm completed Harmonized-GAP certification in 2018, opening markets to grocery chains like Food Lion, Martin’s, Giant and Harris Teeter. The Sponaugles live on the family farm in which includes a 200 cow-calf operation and raises turkeys for Virginia Poultry Growers Cooperative. Kari and Michael have two sons, Jasper and Clu. View all posts by SponaugleKB