Growing up in the shadows of the Cumberland Mountains, I love the sound of creeks running through the hollers and seeing the island of trees springing forth from the fog in the mornings!   I am very proud to be an Appalachian American and I am very fortunate to have been able to come back home!  I very passionate about my area and one of my constant prayers is for the Lord to use me to do some good for my people and community!  This VALOR Seminar was very different for me as my other fellows were able to see me in my habitat.  I tried to embrace the opportunity and did my best to be willing for the good and bad to be shown!

Far Southwest Virginia has been known for coal, tobacco, and cattle. These were our main economic drivers and traditions are well established in the area as one generation has passed to the next generation how to be successful. In the last 15-20 years, we have lost two of these with only cattle remaining in our area. Lee County for example grew almost 3,000 acres of burley tobacco when I was a child and this year we had about 150 acres. Coal has seen a dramatic decrease in last 10 years with many families struggling or moving away from the area. Coal once was our life blood and paid our schools and roads! Appalachians have been judged by some very harshly for being involved in these two industries. I realize both industries are not free of sin, however, these industries were not chosen by the people. They were chosen for us for the most part. Burley tobacco was brought to the Appalachians as part of the New Deal with an allotment system in place giving families a way to make cash money. In 1919, Lee County only produced 19 acres of burley tobacco and by 1949 that number was in the 2,000s. No matter how you feel about tobacco, it kept many families in the region going year from year including my family. The crop was very labor intensive, so each family had a patch of tobacco maybe an acre or maybe less. Everyone worked in burley tobacco and it was a family activity. Youth were let out of school to work in the tobacco crop. In WWII if you were a miner in the coalfields, you probably were not draft into service because the government needed you in those mines. When bloody mine strikes took place, often the government took the owners side and not the workers. I am part of the last generation who worked in tobacco and seen the highs of coal. I know how to fit the most sticks of tobacco on a wagon and when it is at the right time to start grading. I also have been in underground coal mines and on surface mines. I know how dark it is 1,000 feet down in a mine and how hardy coal miners are.

In recent years, my beloved area has more been known for economic disparity and the center of the opioid epidemic.   The counties in far Southwest Virginia and those that adjoining them in different states are in the ten percent of poorest counties in the United States. Opioids have been prescribed at a record rate in our regions. The city of Norton being was highlighted by the Washington Post for having a per capital opioid prescribed as 306 pills per person per year on average from 2006 to 2012. During our VALOR Seminar, many fellows had questions about the issues in Appalachia. Why the area was so poor? Why we had so many health issues? Why were we the center of the opioid epidemic? These are issues I see every day and work to find solutions to those that I feel I can make a difference working on. It was hard listening the group discuss these issues and their thoughts. It was a very sobering experience looking at the issues through outside eyes. I did personally gain a fresh perspective on several things and I hope the other fellows did as well.

During our VALOR Seminar, I was excited for the VALOR Fellows to experience some of my culture and see some of the movement to bring a bright future to the region. There is not one specific answer to the issues in Appalachia. During the Seminar, we were able to go to Lincoln Memorial University’s Veterinary School, which is the 30th veterinary school in the United States. The school has students from across the U.S., but has a focus on the Appalachian Region. LMU also created the Center for Animal Health in Appalachia where they focus on research of animal health in the Appalachian Region. The school has brought fresh opportunities for livestock producers and students. We also visited Will Shipley who is a young farmer I work with in my job. Will grows burley tobacco and now has branched out into hemp. He has worked to figure out how to grow hemp successfully and has started growing clones for other producers. Some other highlights Gwen and Starling Fleming welcomed us to their cattle farm and Suzanne Lawson welcomed us to their vineyard both farms are on reclaimed mine lands. The fellows were also able to watch the Trail of the Lonesome Pine Outdoor Drama in Big Stone Gap and visit the Harry S Meador Coal Museum. At the museum, we were able to meet with Tyler Hughes who shared with us about the music of the area and played for us the United Mine Workers’ theme song. He also shared about his work on alternative energy and serving on Big Stone Gap Town Council as a young man in his 20s. Overall, I hope my fellow VALOR Fellows gained understanding into the richness of Appalachian Culture and the struggles, but I hope they gained a sense of hope for the region as well! 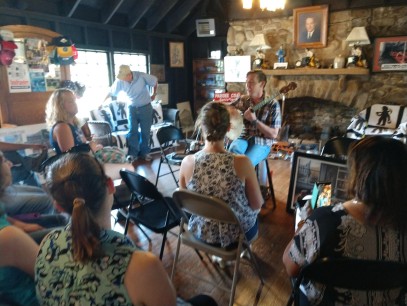 View all posts by valoramygailfannon

1 thought on “Home is where the heart is!”