“We shouldn’t use the word ‘test’ to describe these assessments,” Dr. Crystal Tyler-Mackey said as she was introducing the purpose of the Myers-Briggs Type Indicator to our class during session three. “The word ‘test’ makes it seem that there is a right or wrong answer, when, actually, there isn’t. These results are just your preference.”

Three sessions in, I can say that probably my favorite part about VALOR so far is the personality, problem solving and strengths assessments we complete as part of the personal growth component of this program. Since one of my top five strengths is “individualization,” I love getting to know others’ unique characteristics and how encouraging those traits can lead to productive teams. I’m a strong believer that the more you understand about your co-workers, family members, and friends – what motivates them, what energizes them, how they problem-solve – the stronger those relationships will be and the more well-rounded your team (or family, or friendships) will be. And teamwork makes the dream work, after all.

During session three, we evaluated our personality types (let’s all fake surprise that I was almost off the chart when it came to my extroversion results), in combination with discussion about our assigned reading, Leadership and Self-Deception. My Reader’s Digest take-away of the book is this: What motivates your leadership strategy? Do you lead from a place that is selfish or do you lead from a place that puts others or a common cause as the priority? How others perceive that leadership makes a difference in the effectiveness of change and accomplishing tasks. If you are leading from a selfish place, you are “in” the box. If you are leading from a place that puts other needs first, you are “out” of the box.

There was a lot of back and forth from the group as to how the book related to them, but finally a classmate made a statement, summarized in short as, “This is all well and good in theory, but does it work in the real world?” Which is a fair point – these theories and assessments are good information, but what good is it in our daily life?

To be frank, the last thing I was thinking last weekend as I helped my boyfriend treat a group of sick calves was, I wonder what Sawyer’s top five strengths are or I wonder if Sawyer’s KAI results would be adaptive or innovative or Am I in or out of the box right now? The question that kept popping up in my head was who was going to give up and quit first. No one ever feels stellar about having to treat sick animals, but with the combination of truck problems, running out of daylight, and calves that haven’t gotten used to a feeding routine, morale was low. As the evening progressed, it became clear that the two of us weren’t jiving as a team. Tensions became high, words were exchanged, very little productive communication was happening from either one of us, and two hours later, we didn’t accomplish what we needed to get done. We were cold and it was officially too dark to do anymore work.

I’m not sure either one of us wanted to spend anymore time together but, for whatever reason, we went to supper in our work clothes and ate in silence. Finally, as the waiter came to pick up the bill, Sawyer said, “What was that? Today was a disaster.” I agreed with him – to put it mildly, working together on this particular farm project was nothing short of a dumpster fire, to give you a mental image. There were a lot of outside variables that were making this chore extra difficult, but we were most definitely not helping each other out. As we sat in the car in my driveway, diving deeper into what went wrong, it became quickly apparent that how we are motivated to complete a task and how we problem-solve are very different. Sawyer described himself as being motivated by a challenge and as a former three-sport athlete, his “keep-pushing-until-we-score” attitude played a role in how he was trying to accomplish the task at hand AND how he was trying to motivate me. He needed me to be the running back to his quarterback*, and to dive in the dogpile when needed, but where was I? Where I normally am when I problem solve – standing on the sidelines, clipboard in hand, anticipating what COULD happen before ever making the play. I am the player that needs a lot of praise when we make a touch down and then needs to strategize in the huddle – because that’s what makes the most sense to me.  As I reflected on the day, Sawyer was truly trying to motivate us in the way he could relate to, but I was deflecting because I didn’t understand his approach at coaching.

The next morning, we went to church (I believe a lot of silent prayer went up regarding patience), grabbed lunch and then drafted a game plan. We both knew what we needed from each other in order to accomplish the end goal of  treating a handful of specific calves. Some of it went according to plan (aka we got most of them to the head chute to be worked) and when it didn’t, we communicated what we needed on the fly and still managed to tackle the problem (using that word literally here as Sawyer pounced on a 600 lb calf in the middle of the open field, restraining it while I jumped in with the medication). There were high-fives, most of the colorful language was directed at the cattle (not each other), and we finished with the sun still in the sky. We got the job done. 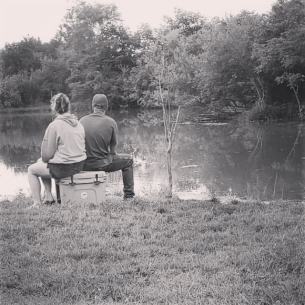 At no point during this little unintentional team-building activity did we ever use the words KAI, Strengths Quest, or Myers-Briggs Type Indicator. While I could make a stab at some of the personality traits Sawyer has based on the assessments we’ve covered, the bigger picture here is that in order for what we are learning in VALOR to work in the real world, its going to take work. Like, legitimate work. Even if I never know what someone’s specific personality test results are, I need to have an open mind and look outside of my own preferences to see that others work differently than myself and that is okay. It is not right or wrong, it is a preference. Being aware of those individual preferences,  putting the work into incorporating those traits as part of the team and being an effective communicator within the group as a whole is what will make these theories applicable in real life – whether you are at the office or in the barn.

*** I actually had to google the relationship of a running back to a quarterback before I wrote that sentence… that’s how little I know about sports…. which makes it even more ironic that I’m using this analogy for this blog. Really pushing outside my comfort zone here!

View all posts by MorganS